There is a global interest in seeking a replacement to Hard Chrome Plating. Tungsten carbide (WC), cobalt (Co) and WC-Co-Cr coatings, thermally sprayed by the HVOF (high velocity oxy-fuel) process, have emerged as the likely replacements.

by By Terry Khaled, Ph.D.
Chief S/T Advisor, Metallurgy
Federal Aviation Administration
Report #ANM-112N-01-02 July 2001
Revision A January 2002
(This thesis is used in this context with the permission of its author, Terry Khaled)

For decades, hard chrome (Cr) plating has been utilized in applications that require corrosion protection and/or wear resistance and also in the salvage industry for rebuilding worn or undersized components. While chrome plating offers certain benefits, it also has some decided disadvantages. In recent years, these disadvantages have led to a global interest in seeking a replacement. Tungsten carbide (WC), cobalt (Co) and WC-Co-Cr coatings, thermally sprayed by the HVOF (high velocity oxy-fuel) process, have emerged as the likely replacement candidates. There are several significant efforts underway to evaluate HVOF coatings and compare them to Cr plating. Some of the data obtained in the various efforts are inconsistent, even conflicting. 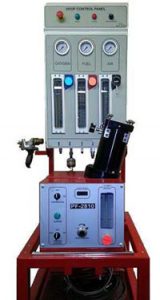 In this paper, the results of the efforts, for which information is available, are reviewed in some detail. Potential culprits in the inconsistent and conflicting data issue are explored. It is argued that performance of any deposit, be that Cr plating or some HVOF coating, is a sensitive function of processing parameters and not a generic material property of that deposit. Suggestions are offered to improve confidence and minimize conflict in the data collected in ongoing and future efforts. It is felt that some collaborative research work is required.