Traditionally, chrome plating has been a process often contracted to specialty shops using an electroplating process carried out under strict OSHA controls. Today, many overhaul shops have been able to bring chrome equivalent repair work in house using High Velocity Oxy/Fuel (HVOF) coating technology. This article covers the benefits of HVOF Coatings versus Hard Chrome Plating, the advantages of HVOF coatings over hard chrome plating as documented by HCAT, HVOF applications, what is needed, the limits and how to proceed with a supplier to jointly review requirements and develop a plan that considers the cost of present plating operations and estimates the cost of incorporating the HVOF process.
Thermal Spray Processes 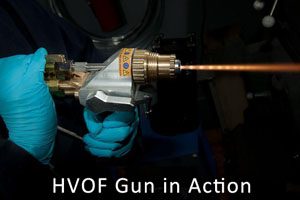 The Benefits of HVOF Coatings versus Hard Chrome Plating

The opportunity to bring chrome plating operations in house is a result of work done twenty years ago by the Hard Chrome Alternatives Team (HCAT) (1). HCAT was an industry and government consortium with members from the United States Department of Defense and United States and Canadian manufacturers. Setting a goal to develop technology to replace hazardous chrome plating operations with HVOF coatings of Tungsten Carbide-Cobalt (WC-Co) and Tungsten-Carbide Cobalt/Chrome (WC-CoCr), the task force adopted a Joint Test Protocol to determine the necessary testing and criteria for success. (Note: chrome in WC-CoCr is not hexavalent chrome which is a carcinogenic associated with chrome plating). Tests included corrosion, wear, fatigue, hydrogen embrittlement and impact resistance. Materials and methods were also prescribed to insure reproducibility. The coalition succeeded in establishing a fully defined and proven procedure that could be adopted by overhaul shops.

Advantages of HVOF coatings over hard chrome plating as documented by HCAT include: (2)

Airline repair depots now use HVOF for landing gear overhaul (3). Boeing is using HVOF coatings for 767 and 777 landing gear and has developed repair specifications based on the HVOF process (4). HVOF is also being used for hydraulic rams in heavy construction machinery and drill components for oil and gas exploration. HVOF is being used as a hard chrome replacement in hydraulic and cylinder piston rods (5) diesel engines, turbines, hand or foot pumps, construction equipment, manufacturing machinery and civil engineering. It is also servicing paper mill rolls. The paper and pulp industry relies on HVOF coatings for wear resistance, corrosion resistance, low coefficient of friction, cleanability and traction.

Any overhaul operation that incorporates gas welding in their operations is three quarters of the way there for adding HVOF capability. Gas and air requirements are very similar as is safety training and awareness. Often the same handling equipment used for HVOF operations is the same as used for welding. As with welding, HVOF operations require control of fumes and radiation using proper exhaust systems and shielding. The main expense is the HVOF gun and controller.

What are the limits?

The HVOF process is a line-of-sight process and is not able to coat around corners. The second issue is speed. Thickness per pass depends on the gun and material but generally ranges from 0.0002” per pass up to 0.015” per pass. The coating speed in surface feet per minute can be high. This is no problem when coating a shaft mounted in a lathe but may require a robot when coating large flat areas.

The starting point is to work with a supplier to jointly review requirements and develop a plan that considers the cost of present plating operations and estimates the cost of incorporating the HVOF process. At the same time, other thermal spray processes for different repair needs can be evaluated.