Thermal spray is a process in which metals, ceramics and plastics, originating as either fine powders or wires, are sprayed onto a surface after being heated to their melting point by an electric arc, plasma or combustion flame. Once applied, the resultant “skin” can be ground, or polished and burnished, then sealed with a patina finish or left au naturel.

For the last 80 years, both artists and architects have discovered that thermal spray provides an exciting new medium for creative expression. Its use enables artisans to economically create durable shapes and finishes, offering unlimited opportunities for discovery and inspiration. In sculpture, there is quick, minimum setup time and no wait for the casting house to do the job.

For the conservator, thermal spray serves as a preservative of art and architecture from the ravages of time and decay. 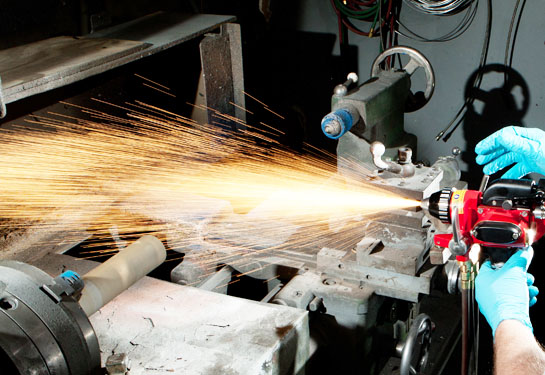 Examples of Thermal Spray in Art & Architecture and Conservation

Constantin Brancusi’s 98-foot sculpture, The Endless Column, located in Târgu Jiu, Romania, is part of a grouping built as a memorial to those who died defending the town during World War I. It is made up of an elongated module at ground level, followed by fifteen identical, rhomboid-shaped modules and a half-module at the top.

As original art, all of these elements were made in cast iron with a thermally sprayed brass coating. After coating, they were threaded down a central steel core. The exterior coating was brass. Bronze would have had better survivability under the environmental conditions (acid rain due to local factory operations) that existed at the site. Over the years, the brass deteriorated and allowed the core to rust. In the mid-‘60s and mid-‘70s, ineffective repairs were made to the coating.

In 1996, the World Monuments Fund placed the column on its World Monuments Watch List of 100 endangered sites. Repairs were delayed due to the unique size of the sculpture and politics. Finally, in 2000, the column was disassembled, the coating was thermal sprayed and the column reassembled. Anyone who thinks that restoration is a simple process will want to consider a twenty page critical discussion of the procedure by Art Watch(1).

During the ‘70s and ‘80s, the artist Jeff, gave up wood sculpture, watercolors and acrylics for a new medium – hot metal sprayed onto canvas with a gun like those used by engineers to coat the underbelly of the Apollo spacecraft. Heated metal erupted from the barrel under high pressure and splashed onto the canvas. The artist wore heat-protected coveralls, a hood and an air-breathing mask.

Jeff called his technique “metallizing” canvas and his first successful result was zinc on canvas stretched over a curving six-by-six foot frame, sanded and polished to a rich gloss. He created a texture on the canvas with thick textured acrylic so the metal could bite onto the surface and hold, not slide or fall off. 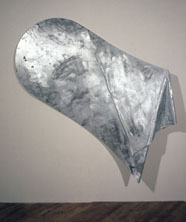 In 1994, artist Siena Porta stated that “Metallizing offers creative options and a cost-saving alternative to bronze casting” (2). Siena Porta is a sculptor whose work was the subject of a video called “Me and the Mirror”. She has covered materials as divergent as silk, cement, polystyrene, fired clay, acrylic, Mylar, wood and cast resin.

Robinson Iron in Alexander City, Alabama, specializes in fountains, gates and other large structures. In 2001, Robinson was contracted to restore the 56-foot high sculpture of Vulcan by Guiseppe Moretti, which overlooks Birmingham, Alabama, to its 1904 configuration by reinforcing its interior and re-coating and reassembling the statue on the restored 1938 pedestal. In addition, Robinson patternmakers created a new spear point and hammer. Zinc was thermal sprayed to both interior and exterior surfaces of the statue to prevent corrosion which was followed by a primer and a polyurethane coating.

The 2004 sculpture, “Bronze Seed”, by Kathryn Lipke-Vigessa and executed by Bauer Art Metal, is one piece of an environmental garden/sculpture installation titled “Life Cycle”. It is a large bronze seed that has broken apart into three sections, a tree to be planted in the midst of its remnants. 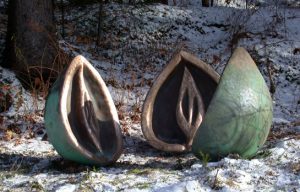 Large blocks of white Styrofoam were shaped into three different seed segments. Stainless steel skeletons were made for each of the three shapes, copper mesh was shaped to the models and the front half was thermal sprayed with zinc to solidify the shape.

The front and back were assembled and sprayed together on the skeleton. The final shape was touched up and thermal sprayed with silicon bronze. It was then highlighted by polishing, enhancing the final appearance of the seed pods with a chemical patina.

Ms. Lipke-Vigesaa chose the thermal spray system because she wanted a totally unique effect and also, due to budget constraints, because of its affordability.

Awarded a U.S. patent, the “Bauer Process”, is the building of three-dimensional objects by spraying metal on wire mesh. Almost any metal, from aluminum to zinc, can be melted and sprayed with the process. Since the resultant coating is 100% metal, it retains the basic characteristics of that particular metal, such as base color, durability, corrosion resistance or a pleasing weathered look.

Patina is a chemical finish applied to the cleaned metal surface to give it a special color or appearance. The resultant surface is then sealed to protect the finish and create a moisture-proof barrier that will last indefinitely and is impervious to almost all solvents and liquids. Bauer states that “there’s almost no limit on what you can do with this process.” 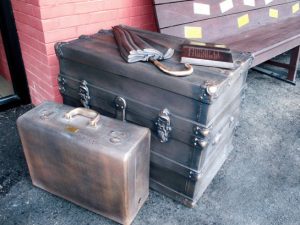 In the area of architecture, thermal spray is being used for both beauty and functionality. One of the largest examples is the Burj Al Arab Hotel in Dubai. When the hotel was being built, vital structural components were thermal sprayed to protect against corrosion. In total, 100,000 square feet of steelwork was arc thermal sprayed over an intermittent six-month period.

The elements sprayed included a heli-deck framework, the roof mounted mast and six diagonal support braces, each weighing in excess of 200 tons (3). An epoxy sealer and three-coat paint system were then applied for aesthetics and finished with a topcoat of 50 microns of polyurethane. The aluminum coating guarantees protection against corrosion in the harsh coastal environment in which the Burj Al Arab Hotel stands.

Examples of Thermal Spray on a Variety of Materials(3) 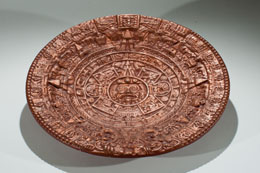 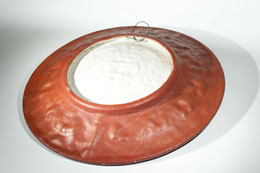 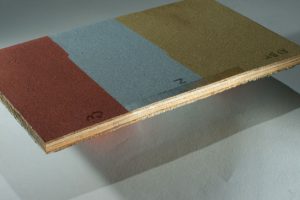 Plywood with aluminum bronze, zinc and copper coating on plywood sprayed with a WireJet 96 Combustion Wire Gun. Note the contours are still visible through the coating

Also, a display of a variety of parts was included in Materials, Science & Technology meeting presentation.

Where to Start as an Artist

Delving into art using thermal spray is easy. Artists can develop their own form and work with a local spray shop to do the coating or invest in setting up their own shop. Combustion wire systems require an investment of less than $8000, are easy to use and are very versatile as to coating materials. Even some plastic “wire” can be used or cord wire can be applied for special effects.