There is a confusing array of manufacturing terms that have come into use in the last few decades. These include terms such as Rapid Prototyping, Additive Manufacturing, Subtractive Manufacturing and 3D printing. There are factors common to all: 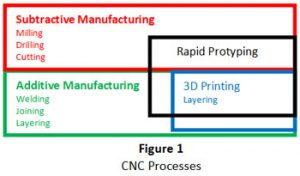 There are now a number of Additive Manufacturing processes including:

Stereolithography (SLA) was developed in 1986 by Charles W. Hull (1). He patented it as a method for making solid objects by “printing” thin, successive layers of an ultraviolet curable material, one on top of the other.

Selective laser sintering (SLS) was developed and patented by Dr. Carl Deckard and Dr. Joe Beaman at the University of Texas at Austin in the mid-1980s, under sponsorship of the Defense Advanced Research Projects Agency (DARPA). (2) 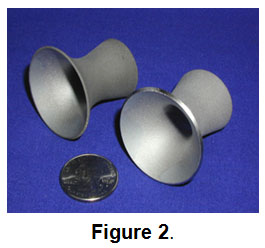 Swansea University developed a process for producing molds using a thermal spray gun. Both Hasboro Corporation and the Ford Motor Company were somewhat involved in considering using this technique for rapid prototyping.

In addition, Professor Singer at the Swansea University developed gas atomized spray forming in the 1970s. In this process, a high pressure gas jet impinges on a stable melt stream to cause atomization. The resulting droplets are then collected on a target, which is then manipulated within the spray to form a dense billet of near-net shape of the final part. (3)
For decades, Plasma Processes in Huntsville has been producing parts for the aerospace industry using a plasma spray process that is essentially additive manufacturing. Figure 2 is an example of spray formed parts produced using a thermal spray plasma gun in a low-pressure chamber.
Fused Deposition Modeling (FDM), developed by S. Scott Crump in the late 1980s, is a process where a thermoplastic is melted, applied and then fused to produce a part. Think of a cake decorator building up the various objects on the cake. For open areas in the part, a “support” material is built using the same process and then removed (dissolved) when the part is finished. (4) 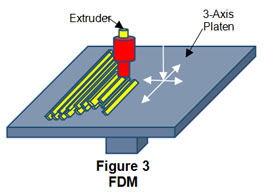 FDM was commercialized in 1990 by Stratasys, Ltd. With the expiration of the patent on this technology, there is now a large open-source development community, as well as commercial and do-it-yourself variants that utilize this type of 3D printer. This has led to two orders of magnitude drop in the price for equipment since this technology’s creation.

The RepRap project is a British initiative to develop a 3D printer that can print most of its own components. RepRap (short for replicating rapid prototyper) uses an additive manufacturing technique called Fused Filament Fabrication (FFF). A plastic filament or metal wire is unwound from a coil for the material that is melted and laid down in layers to produce a part as shown in Figure 3. In this example, the extruder used to melt the material is fixed and the table moves in all three axis. In other systems, the extruder moves in one axis and the table in the other two. The project is called Fused Filament Fabrication (FFF) to avoid trademark issues around the “Fused Deposition Modeling” term.

All of these processes begin with a software that produces an STL file (stereolithography file format), mathematically slicing and orienting the model for the build process. The machine may dispense multiple materials to achieve different goals: for example, the designer may use one material to build up the model and use another as a soluble support structure, or the designer may use multiple colors of the same type of thermoplastic on the same model.

While there is a lot of hype about additive manufacturing, it is still only a small part of CNC operations as shown in Figure 4. However, it is rapidly growing as prices of machines drop and machine controls advance. The primary area of the entry level 3D printing machines is in the consumer products area with a present market size of roughly $200 million. (5) (6) 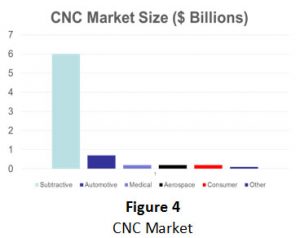 3D materials are strongly dictated by the process. In many cases, the outer surface of the part is compromised because of these limits. This is where thermal spray comes in. The surface can be engineered separately from the core. Thermal spray provides a cover that:

The result is a cost that the customer accepts due to the critical nature of the product for aerospace, medical, energy, oil exploration, etc.

The 3D market cannot support the traditional costs but peripheral costs can be significantly reduced:

Therefore, costs and pricing should be significantly lower for 3D print coating operations. 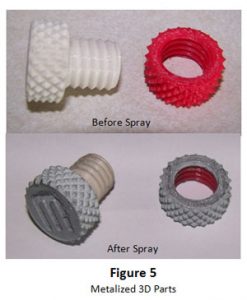 In addition, thermoplastics use different parameters:

Figure 5 is of some 3D demonstration parts that have been metalized using an economical thermal spray process. Note that, other than washing and drying along with simple masking, there was no additional preparation.